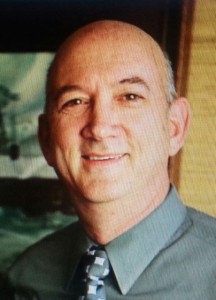 Dr. Holmes attended Brigham Young University for 2 years, then moved to Seattle and graduated from the University of Washington in 1980. He completed his medical education at Ponce School of Medicine in 1986 and completed the Family Medicine Residency Program at Oregon Health Sciences in Portland, Oregon in 1989.

He worked in the small town of St. John Washington in rural private practice for 11 years. In July of 2000, he accepted a faculty position at the Utah Valley Family Practice Residency program and moved to Provo Utah, where he taught and trained physicians in Family Medicine. In 2002, he joined Cottontree Family Practice where he enjoys his partnership with Dr. Woodmansee. He provides a wide range of medical care in the specialty of Family Medicine.

Dr. Holmes is married to Pam and they have 4 children and 17 grandchildren. In his spare time, he enjoys music, art, and spending time with his grandchildren. Dr. Woodmansee was born in Colorado and completed his undergraduate work at Brigham Young University. He completed his medical education at St. George’s University and graduated in 1988. His residency program was completed at Union Hospital in Terre Haute, Indiana. He is Board Certified in Family Practice AAFP from 1991 through present. He worked at Talbert Medical Group in Orem, Utah from 1995 until 1997 at which time he left to join Cottontree Family Practice.

He married Michele Johnson and makes his home in Provo. He loves gardening, and is proficient in the art of growing grapes. Boyd joined Cottontree Family Practice in 2006. Prior to that, he was a co-owner and head trainer for FitQuest Fitness and Rehabilitation in Orem, Utah.

Boyd enjoys the family practice setting, and is extremely proficient in diagnosing and treating his patients.

He also enjoys working out and sporting events of every kind and spending time with his family. He is married to Corinna and they have one daughter. Brian Platt was born in Baraboo Wisconsin and attended Baraboo High School. He then attended the University of Wisconsin, in Madison where he received a Bachelors of Science Degree as a Physicians Assistant.

He joined the Desert Foothills Emergency Room team in Carefree Arizona evaluating all presenting patients as a sole provider in the Emergency Room setting. He also managed a 12 member ER Physician Assistant /Nurse Practitioner Group. At the same time, he worked with Mountain View Multispecialty Clinic in Phoenix, Arizona treating patients in the family practice setting. Brian is married to Janet and they have 2 children. Brian loves to fish and enjoys practicing at Cottontree Family Practice because “they are his second family”.